At some point during the planning of a trip to the Highlands and Islands, which was already to involve running a half marathon, it seemed like a good idea to try and fit in a nice ridge walk, and in the process bag six munros.

We’d arrived back on the mainland from Skye the night before, and we’d camped at a site in Glen Shiel, just past Shiel Bridge, and close to a bus stop, so that we could make the connection onwards to the Cluanie Inn in the morning. We ended up almost missing the bus, since we’d arrived at the site too late the night before to pay, and the office didn’t open until 9am; fortunately the bus was delayed, and we were under way to the Cluanie.

The drive only lasts around 15 minutes, and before we knew it we were at the start of the path (and I was one cap lighter, having left it on the bus…). We made the initial ascent pretty quickly, and started along the Brothers ridge. It wasn’t too long before we started to realise that this might not be the most straight-forward walk we’d ever done.

As we made our way along the ridge towards the first munro, Aonach Meadhoin, we ran into a group from Durham University Mountaineering Club, and we met some more of their party on the summit immediately before the munro, Sgurr an Fhuarail. We made it to the first munro after 90 minutes, and 5km of walking. Altitude 1001m.

The next munro would prove to be a more challenging ascent, with a walk off the main ridge to the summit which required quite a bit of scrambling, which was complicated by the presence of a rather artifical-looking wall. The summit of Sgurr a’Bhealaich Dheirg (Altitude 1036m) is marked by an enormous, and unusually well-built conical cairn, perched rather precariously on the summit. We decided to stop here and have lunch, thinking at this point that we were making pretty good progress. The total lack of wind, however, made this an uncomfortable place to rest, with the presence of the high-altitude highlands midge.

We continued onwards along the ridge, and completed a munro which, at the time, we hadn’t realised was a munro: Saileag. Altitude 956m. 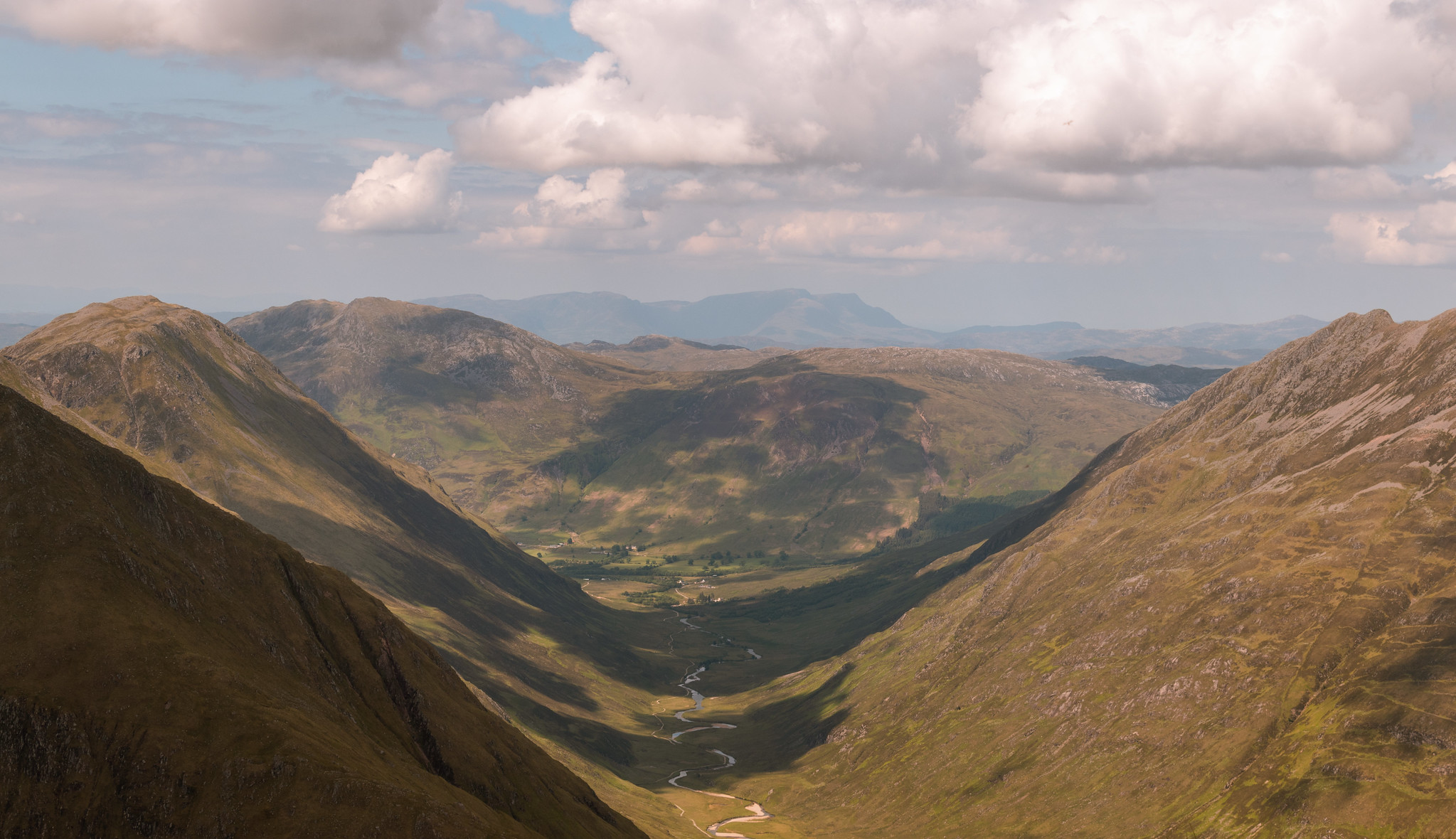 The day wasn’t over yet, however, and we’d only climbed three of the six munros of the day (we’d failed, however, to actually take note of which summits were munros before hand), and so we descended the Bealach an Lapain between the two parts of the ridge, towards the Five Sisters.

The Sisters ridge bends around the remainder of Glen Shiel towards Loch Duich, and climbing its peaks required more scrambling than the Brothers, with each summit craggy and rocky. By the time we started on the second half of the walk we’d had several hours of baking heat, and despite the odd breeze it had been unrelenting. We continued into the section of the walk where there was no ready access to running water.

The first summit on the ridge is Sgurr nan Spainteach, the peak of the Spaniards, which lies less than a kilometre along the ridge from the first of the sisters’ munro summits, Sgurr na Ciste Duibhe (Altitude 1027m). By the time we reached this peak we were starting to become a bit worried about our water supplies, but we dropped the 160m to continue along the ridge to the next munro, and almost perfect cone, Sgurr na Carnach (Altitude 1002m). Carnach had the least impressive cairn of the summits thus far, but we stopped for a short time to rest here before pressing on to the final munro, Sgurr Fhuaran.

We were tired, probably a little dehydrated, and daunted; climbing to the final summit meant ascending a steep slope from the Bealach na Carnach, 140m of ascent over around 250m of horizontal movement, but knowing that this was the final munro, and that the end was in sight, we pressed on to reach Sgurr Fhuaran (Altitude 1067). Surveying the remainder of the ridge from the summit, we agreed that we should contour around to avoid the next summit; we were tired, the evening was closing-in, and we were short on water.

While contouring proved to be more challenging than we’d initially hoped, we eventually met back up with the descent path after an hour or so, and were glad to find a shop which sold bottled water open near the end of the path. A half hour’s walk back along the road saw us back to the campsite, where we were able to enjoy cooking dinner in a cloud of midges.

Six munros in one day marks a new record for me, with a total ascent for the day of 1917m.